This year I spent New Year’s Eve at the Boston Marriott at Copley Place. I was photographing Stephanie and John’s wedding! When I arrived, this was the view from Stephanie’s room…amazing!! 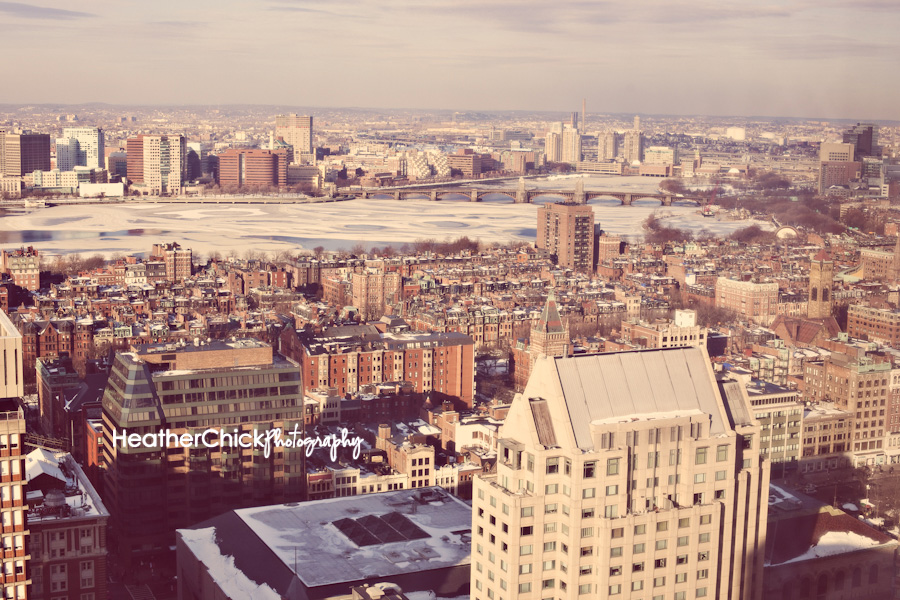 Stephanie had a huge bridal party…the girls were coming and going and hanging out while Stephanie was finishing up! 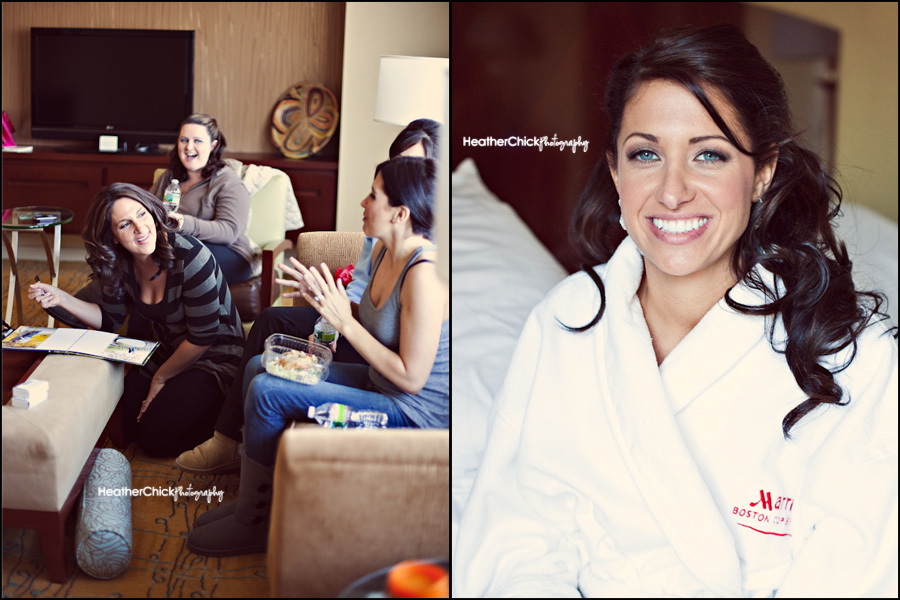 The flowers were gorgeous (I have a soft spot for the black/white/red combination!), and the shoes were fabulous! 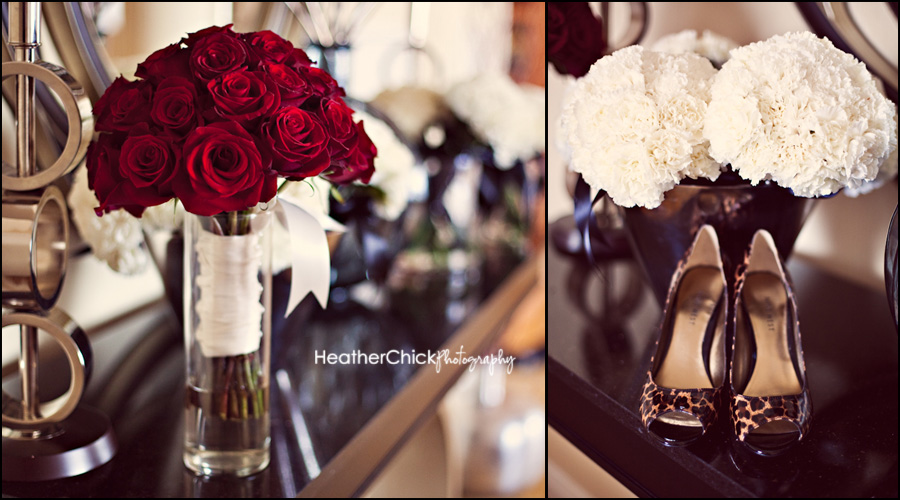 Stephanie’s mother and maid-of-honor helped her into her dress. 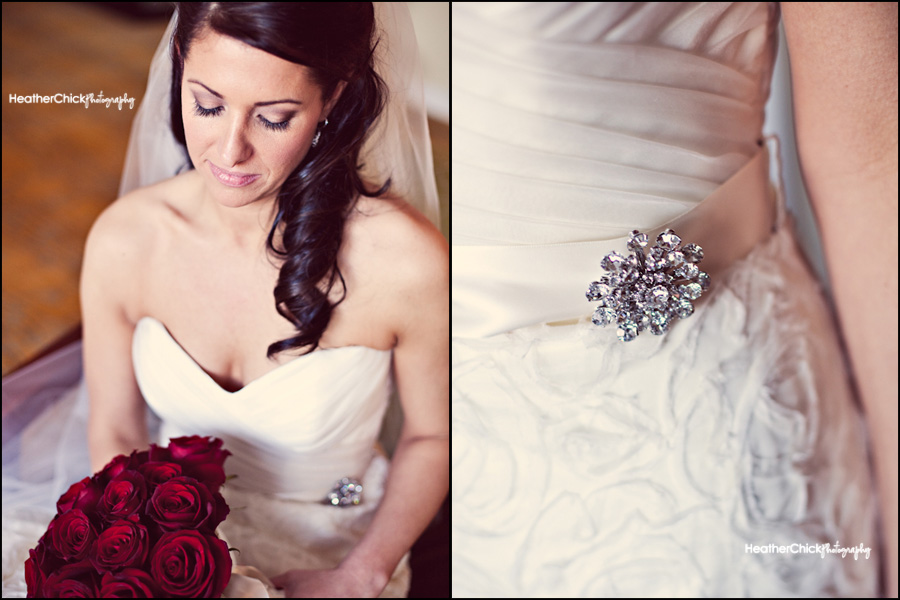 A couple floors away, John was getting ready and working on collecting his whole group of groomsmen!  The two little guys are John’s newphews. 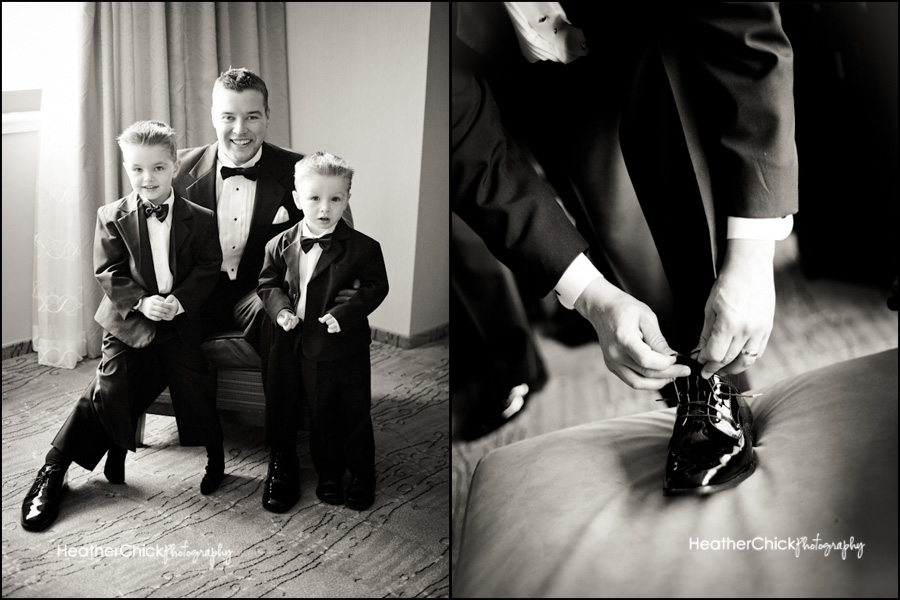 Stephanie and her Dad walked down the isle in the church that John’s parents were married in. 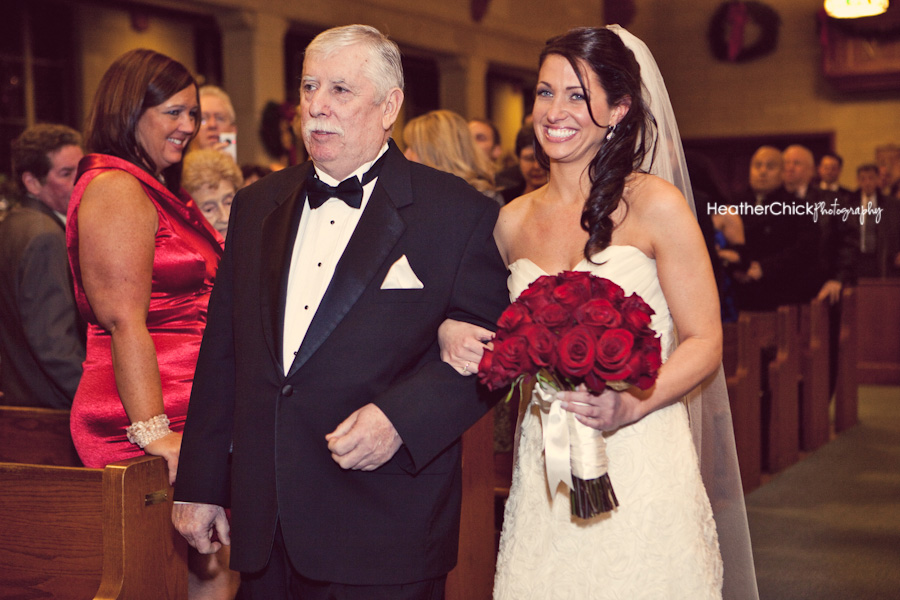 A beautiful alter with the Christmas decor still adorning it… 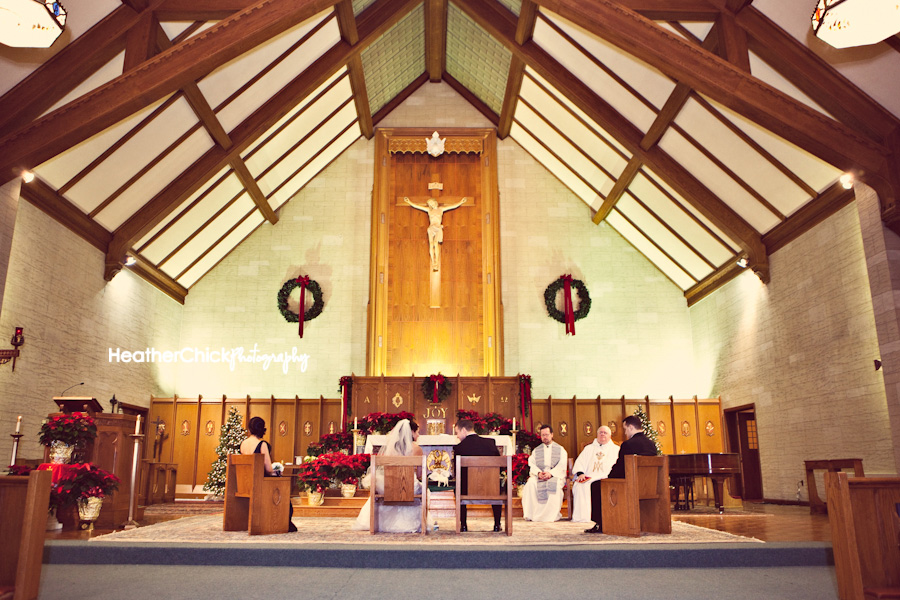 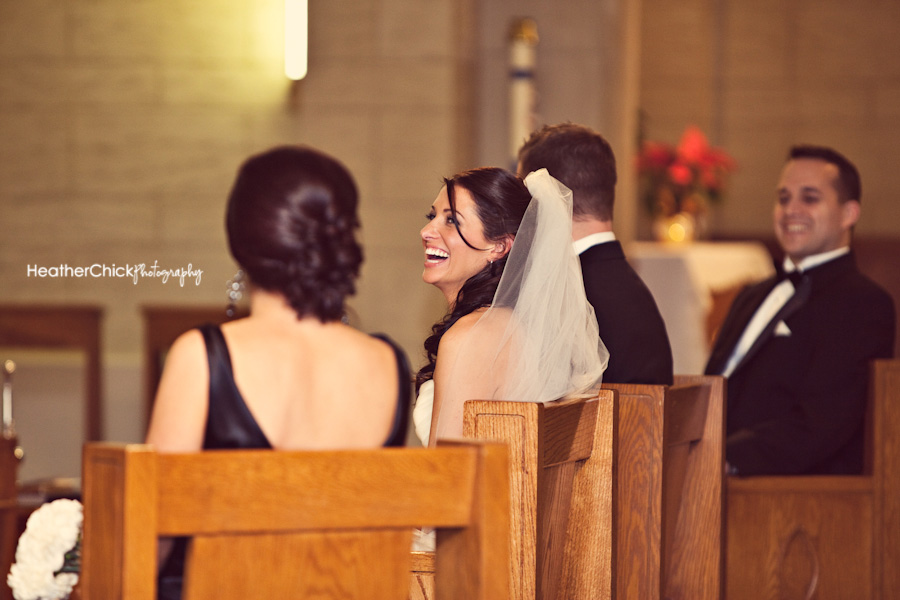 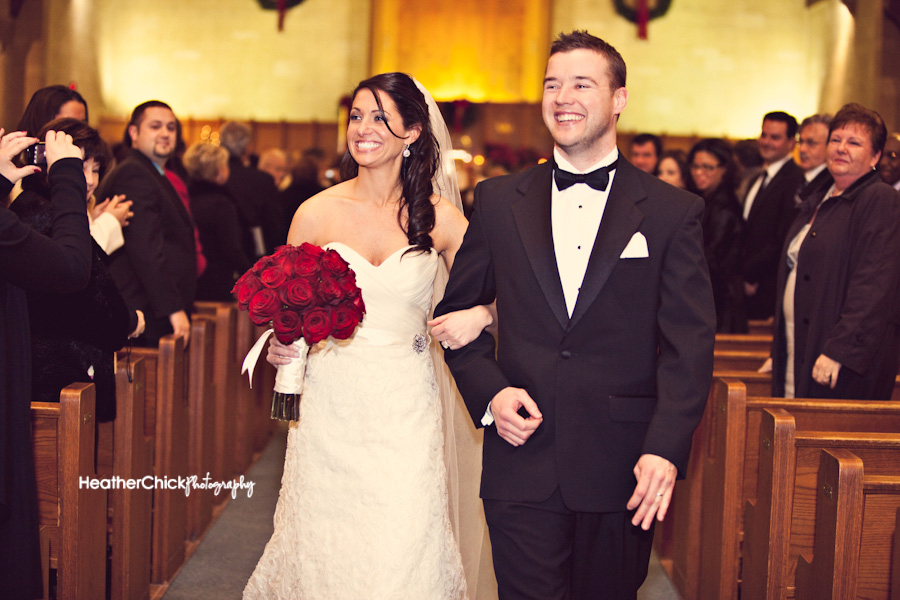 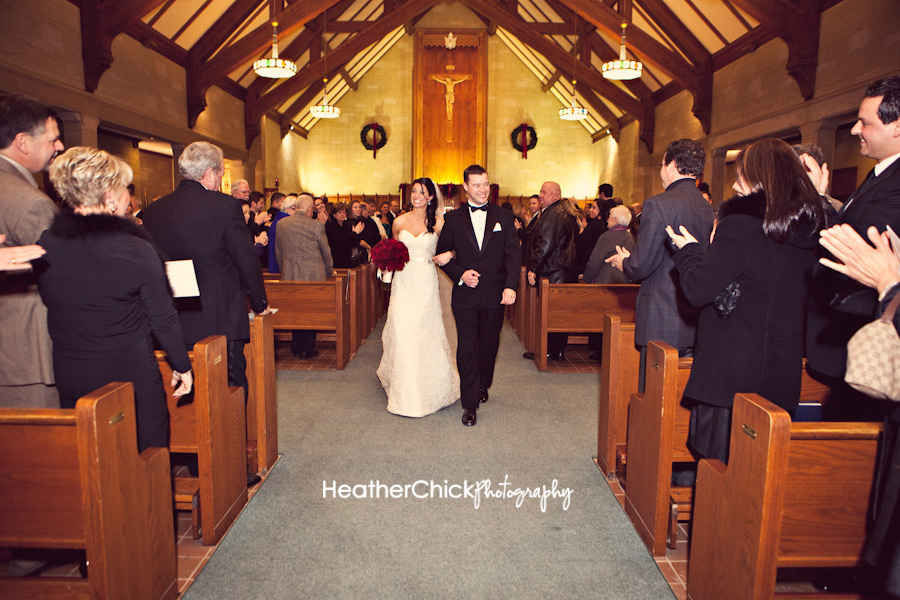 Stephanie and John hired buses to transport all of the guests to and from the ceremony, and we had a bus specifically for the bridal party and immediate family. We spent a lot of time on the bus returning from the ceremony….Everyone was out and about at that time and there was a lot of traffic! We had planned a few spots for pictures, but our plans had to be changed because there were parties and blockades at the spots we had planned! 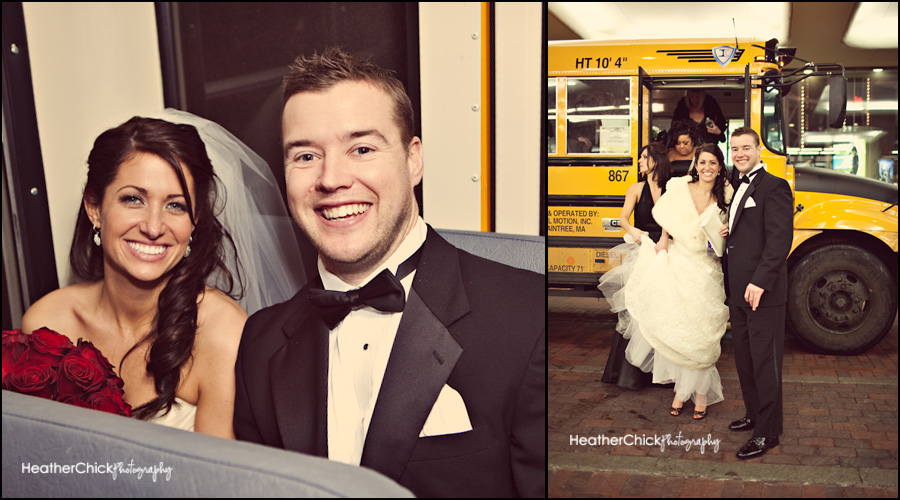 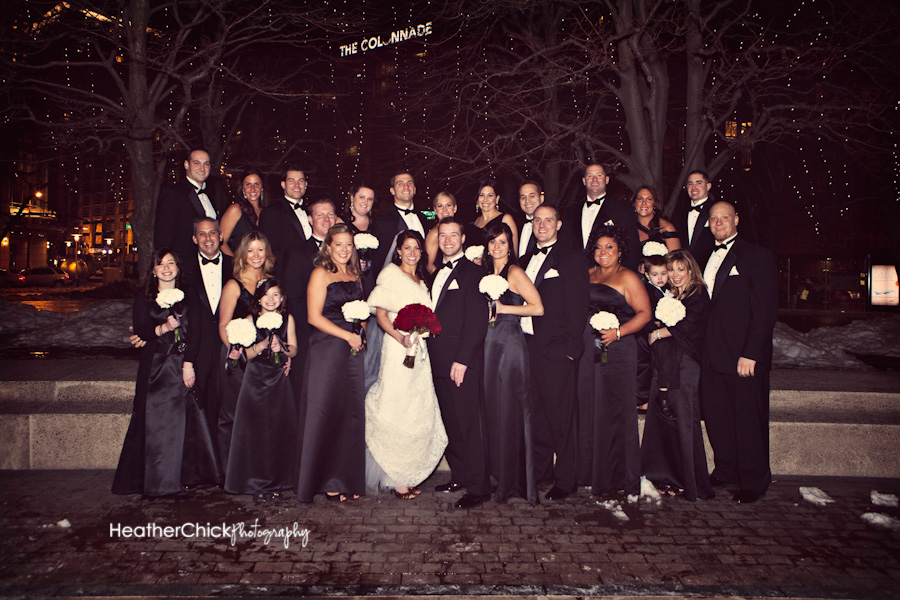 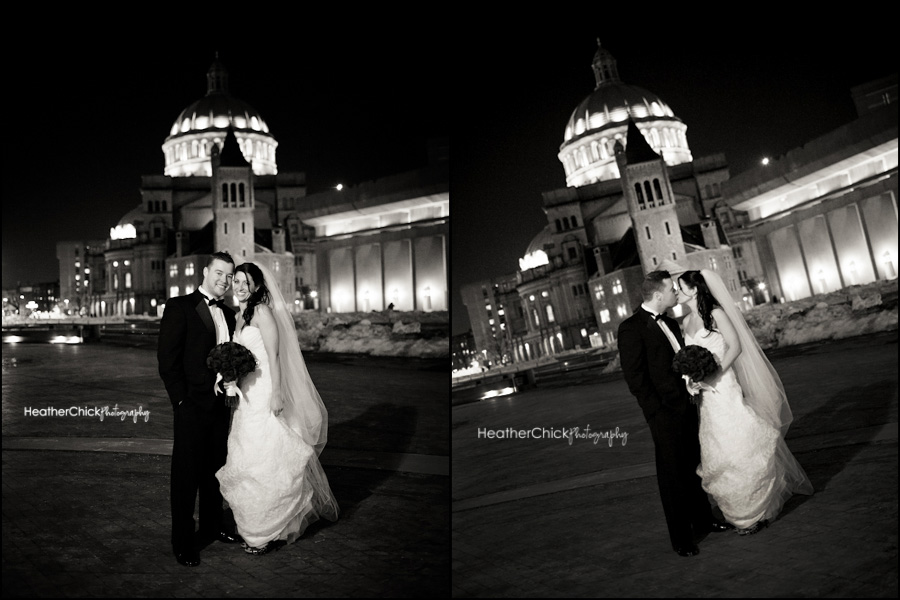 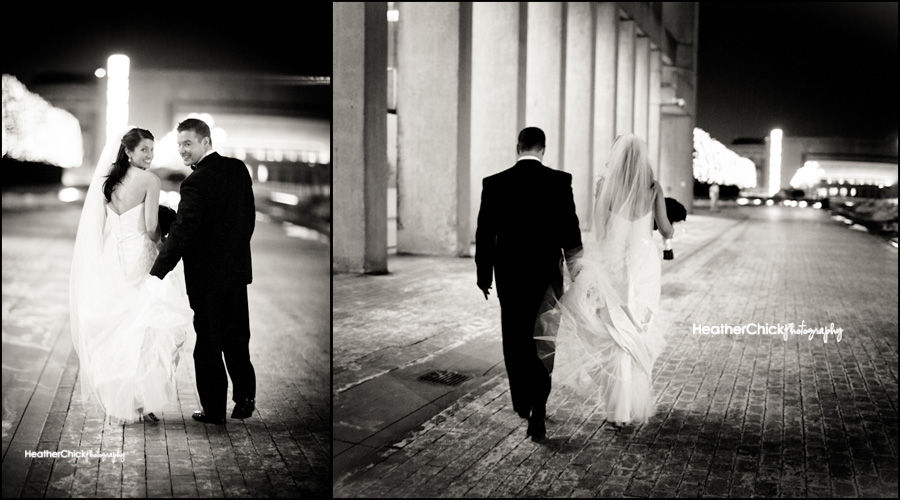 Back at the hotel we headed up to the room that had been designated and decorated for pictures! We did the rest of the bridal party pictures and family pictures there before the reception began. 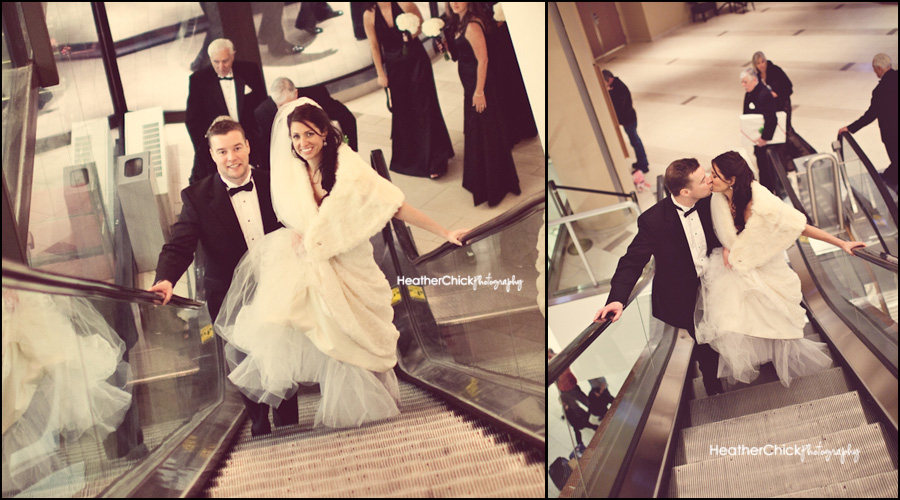 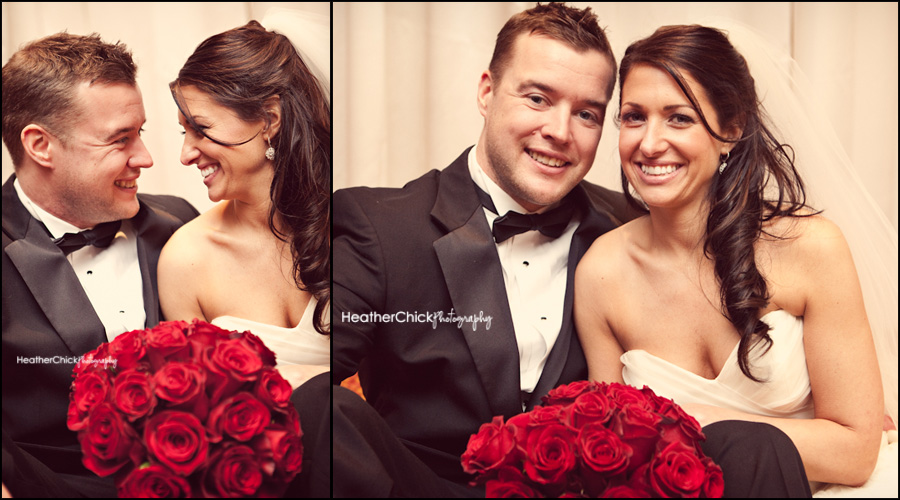 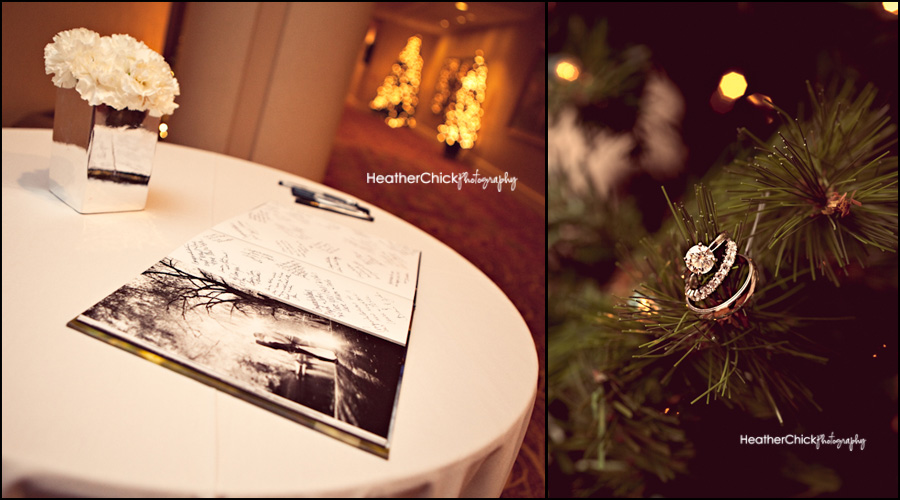 The room was stunning…As I have said a few times before, up-lighting is phenominal!!! Stephanie and John created the tall centerpieces themselves…They collected the sticks (I believe the maid-of-honor’s father helped with that), and then John spray painted all of them….I was so impressed!! They were gorgeous! 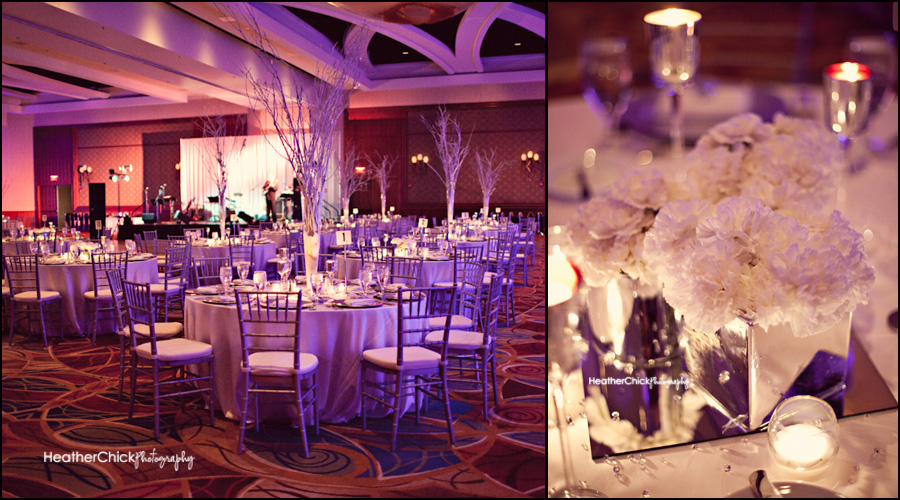 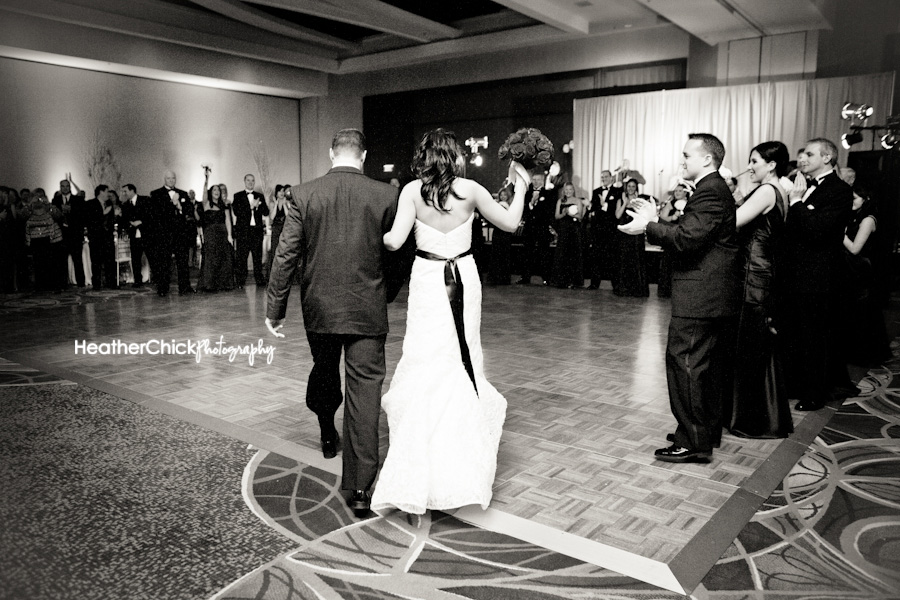 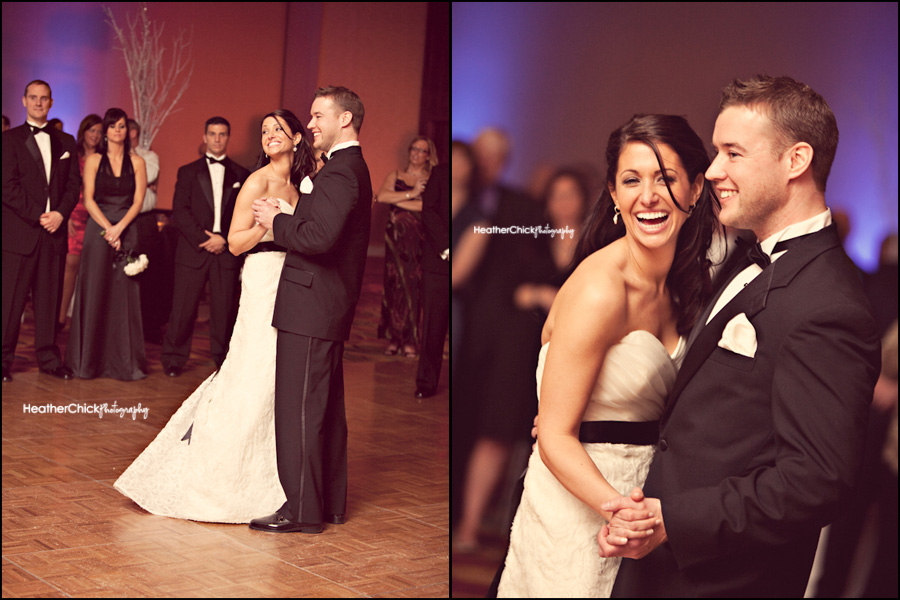 John’s best man gave his speech and spoke about the one thing that they fought over…it wasn’t a woman (ha ha ha) it was a G.I. Joe guy…hence the “gift” that John is holding! The gentleman on the right gave the blessing. 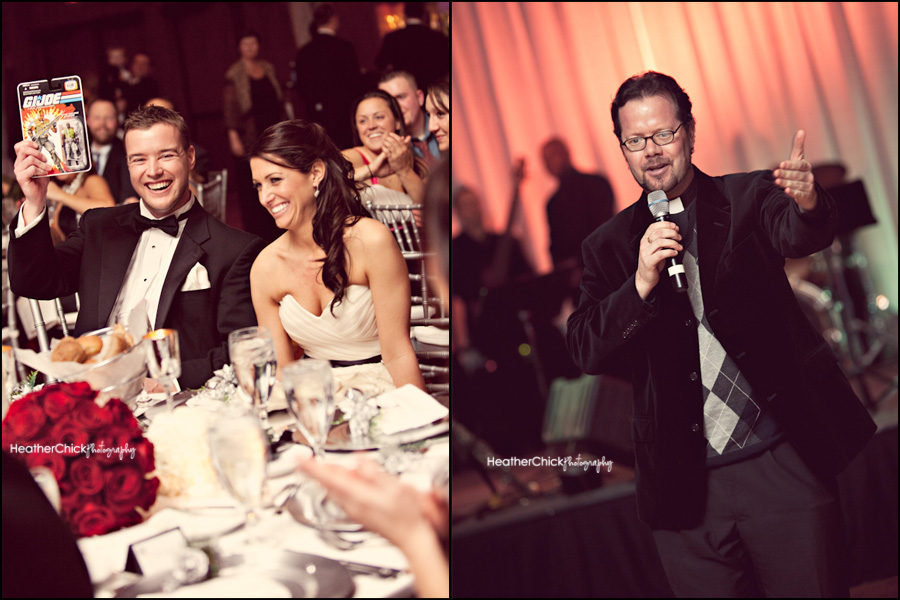 The party was in full swing when Stephanie went up…. 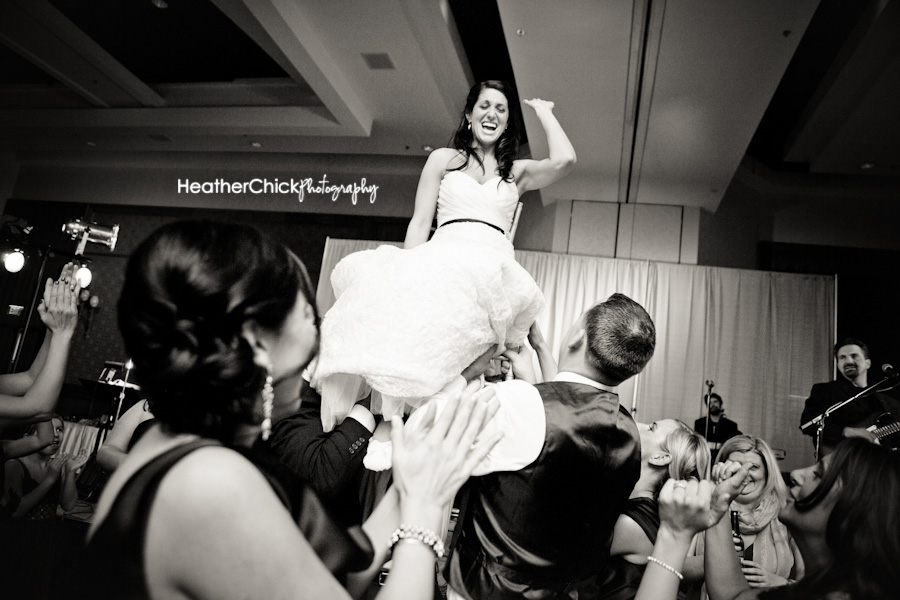 and John was next! 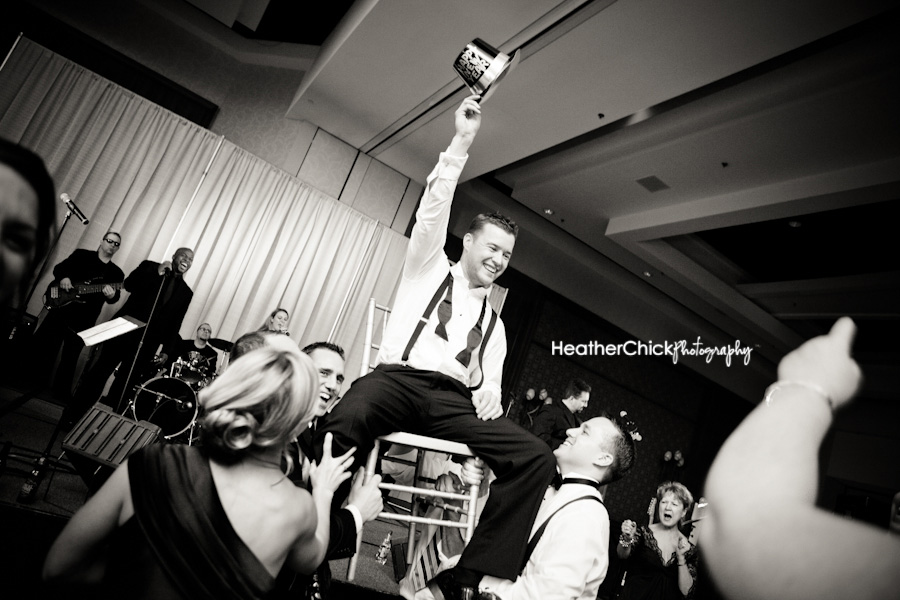 The NYE decor had just come out when John was lifted up…Hats, headbands, and noise makers galore! 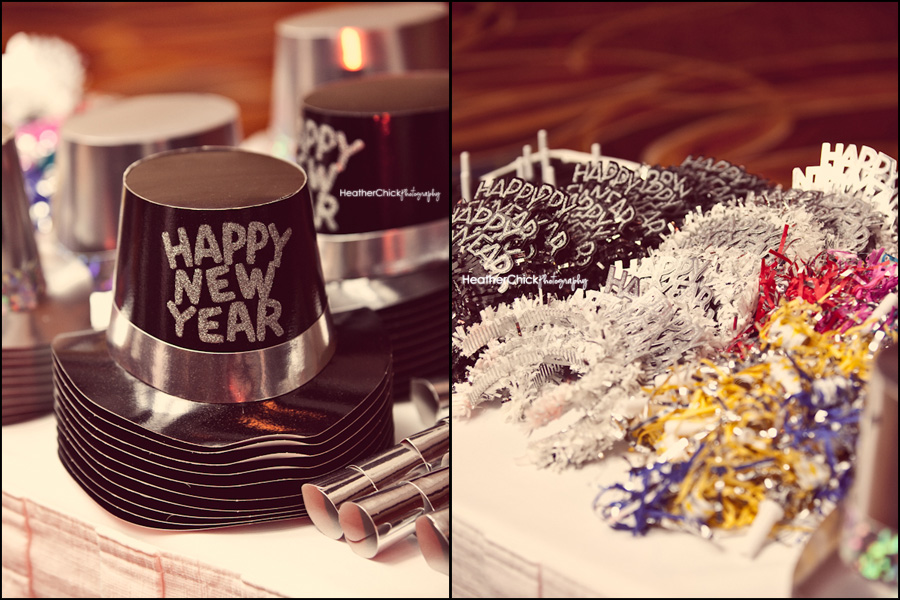 Eileen was the name of the evening….BOTH Stephanie and John’s mothers are named Eileen! Of course the song was played and they danced! 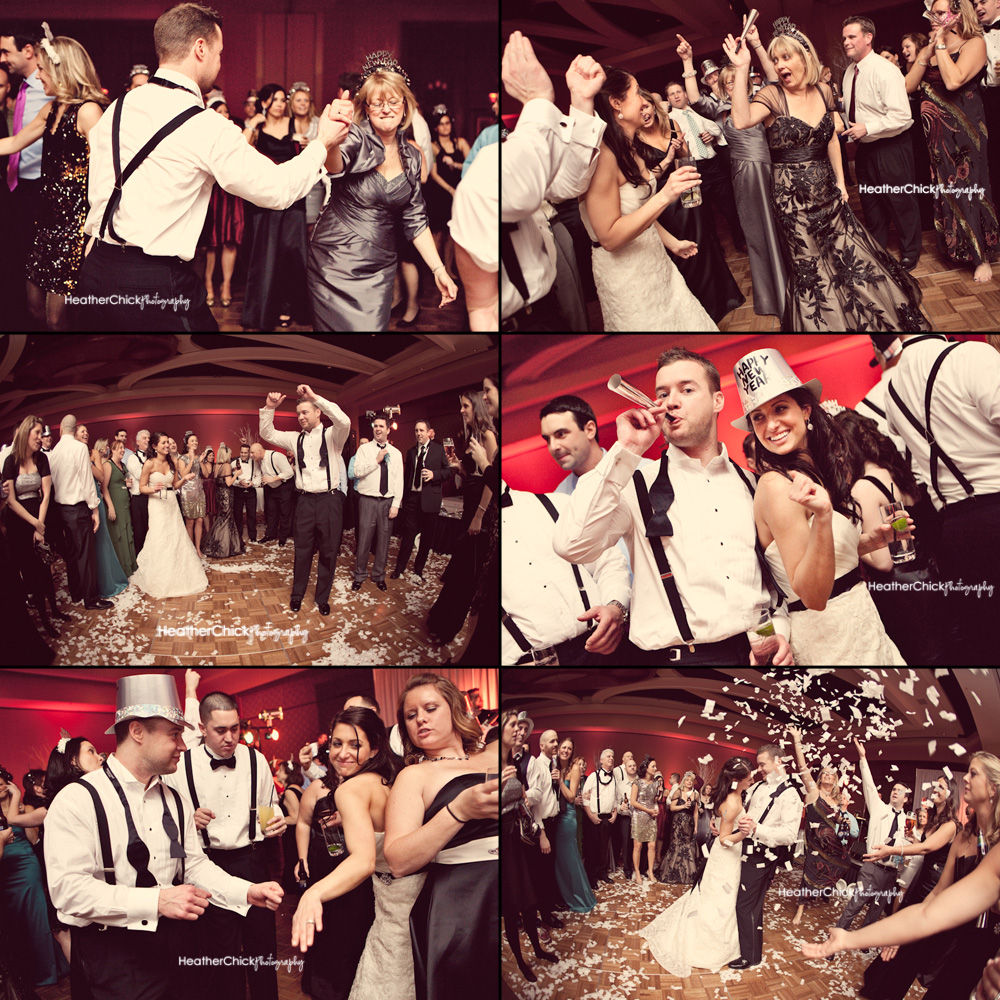 There was also a confetti machine that went off at midnight. Stephanie gave me the heads up for it, and I was in position…the only small problem was that it blasted a big ball at a few people’s backs and it all fell to the floor…That didn’t really matter though…people found the confetti and began throwing it themselves! Steph and John were on the stage with me at the stroke of midnight…it was a great view! 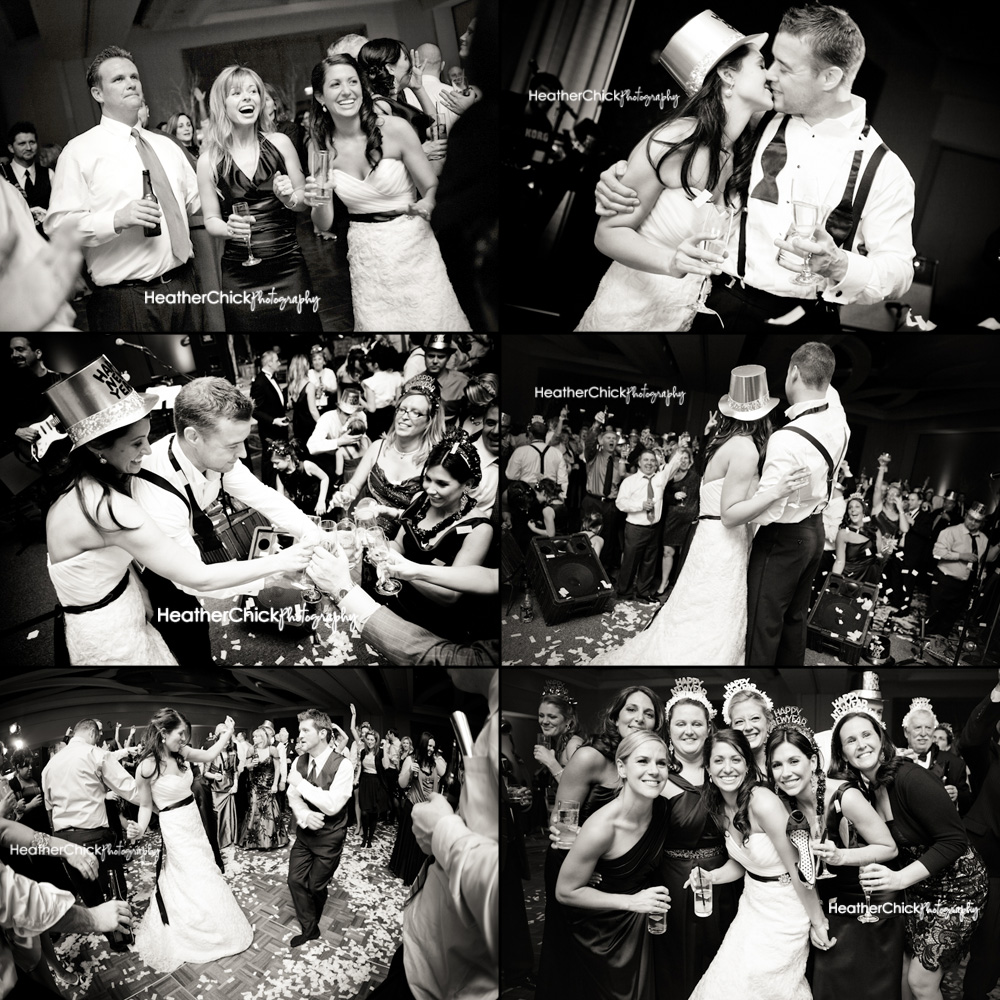 A few pictures of couples from the end of the evening…The two couples on the left may look familiar if you peek at my blog often! They are the Pauline family!! I have done many sessions for their family ( here, here, and here) and a wedding for their family last January (the fabulous Lindsay & Matt)! They are the reason that Stephanie and John found me…Thank you Pauline Family!! The gentleman on the right is the best man that gave the clever speech!! 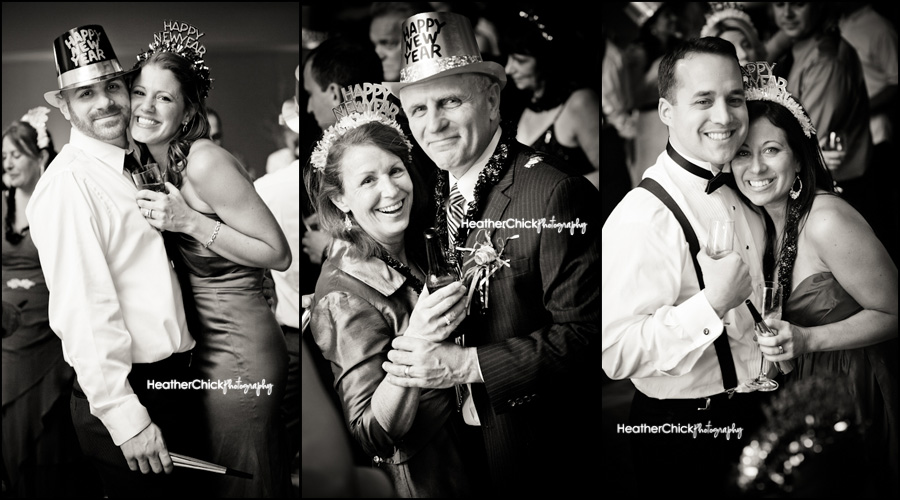 I had to include a couple pictures of Steph’s Pop…It was after midnight and he was on the dance floor dancing with his grandchildren! 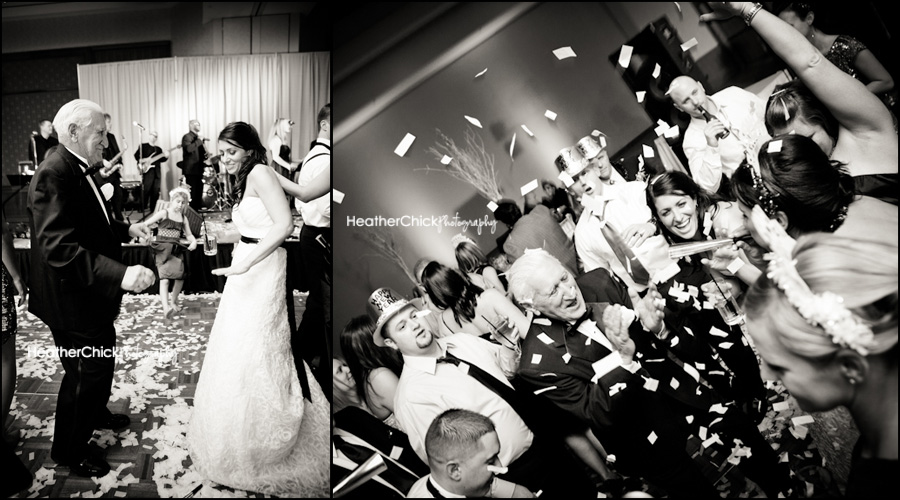 One final picture of Steph and John…Thank you for choosing me to capture your day and fun party! Happy New Year! 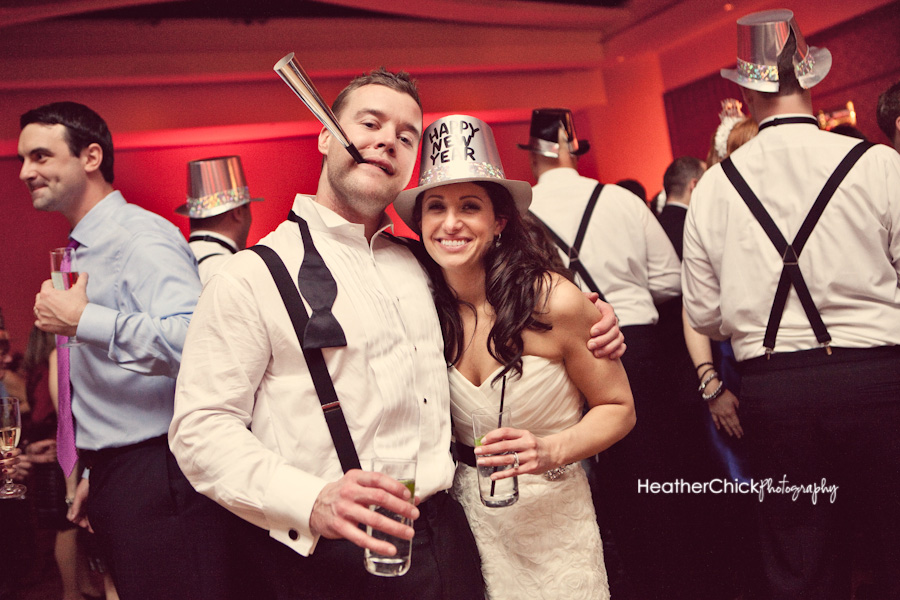