I have been excited to share this preview since I photographed the wedding! There is such a fun story that ties Stephanie and I together…I have already shared it a couple of times with some of my other clients because it is that good!!

A few weeks before Stephanie’s wedding, I headed to the Cape with my husband and a couple of friends…It was my only weekend off for the summer and we had planned an overnight stay in Falmouth. After dinner and a couple of drinks we were headed back to the hotel when the trolley driver told us that there was live entertainment around the corner at The Boathouse. We decided to give it a try…We hadn’t even been in The Boathouse for 5 minutes when my friend offered to take a group picture for someone with their camera…When I turned around to offer my help, I noticed that it was not only a baccelorrette party, but it was one of my upcoming brides…It was Stephanie!! I looked at her and yelled, “Stephanie, I am your wedding photographer!!”. We had only met each other once, because Stephanie lives in New York City, and it had been almost a year ago!  I spent a big chunk of the rest of the night chatting with her and her sister Christine, while my husband bought the girls drinks (He is the reason that they discovered me…He does electrical work for Christine and her family!)! I still can’t get over it to this day!!

Now that I have told that story, I will get back to the actual wedding day of Stephanie and Frankie!

The day started at the LemonLime Salon in downtown Falmouth…Stephanie had her hair and make-up done there (along with the girls and her mom)…After that was completed we headed back to her parents house to put on the dress and the final details. 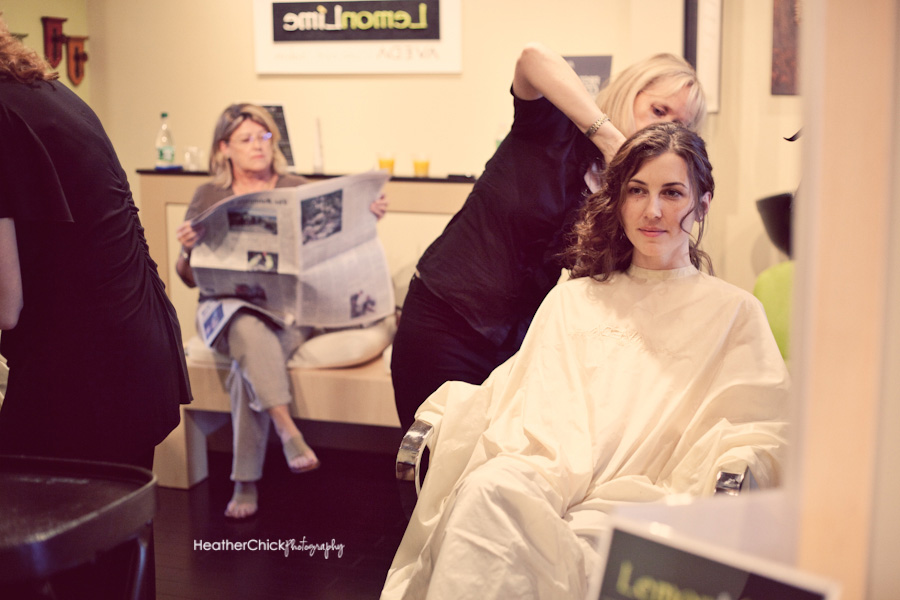 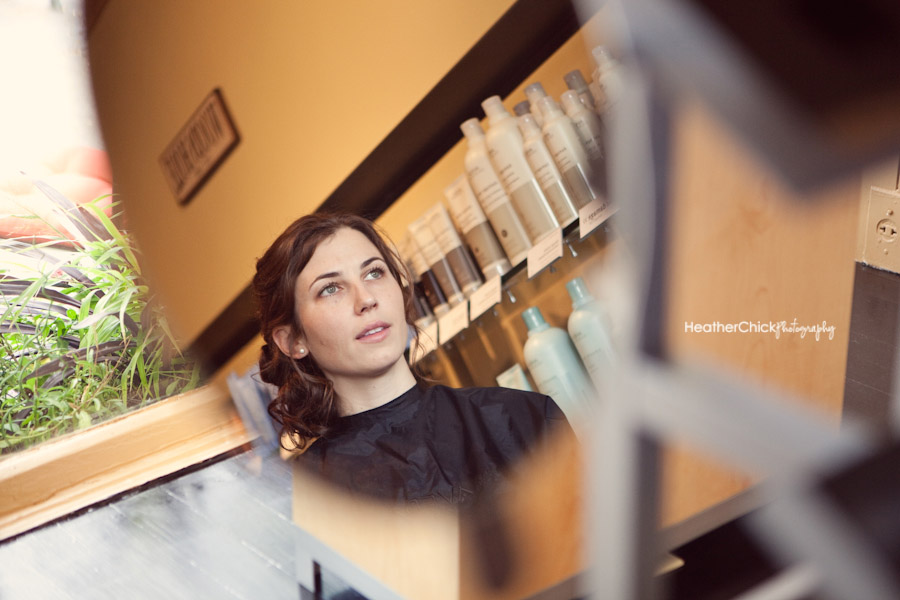 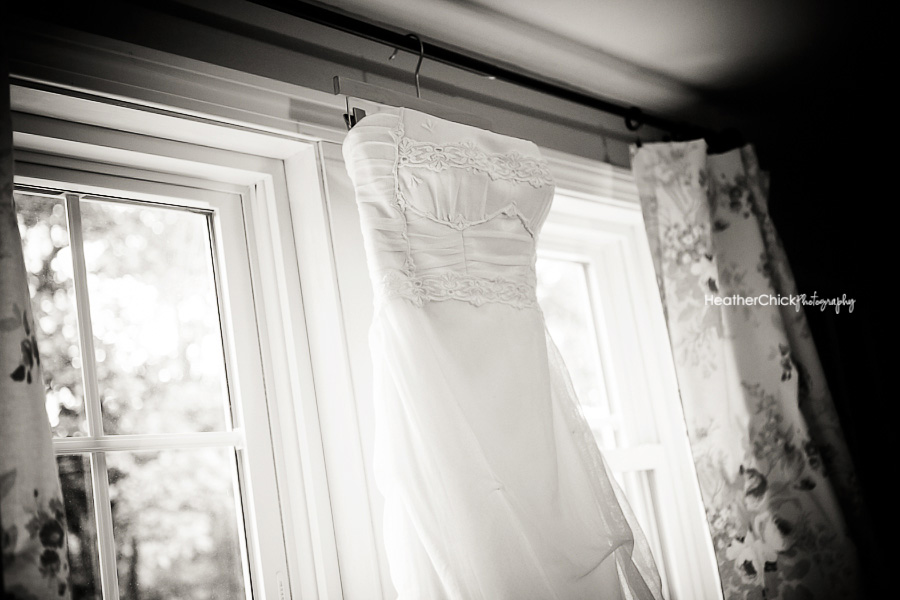 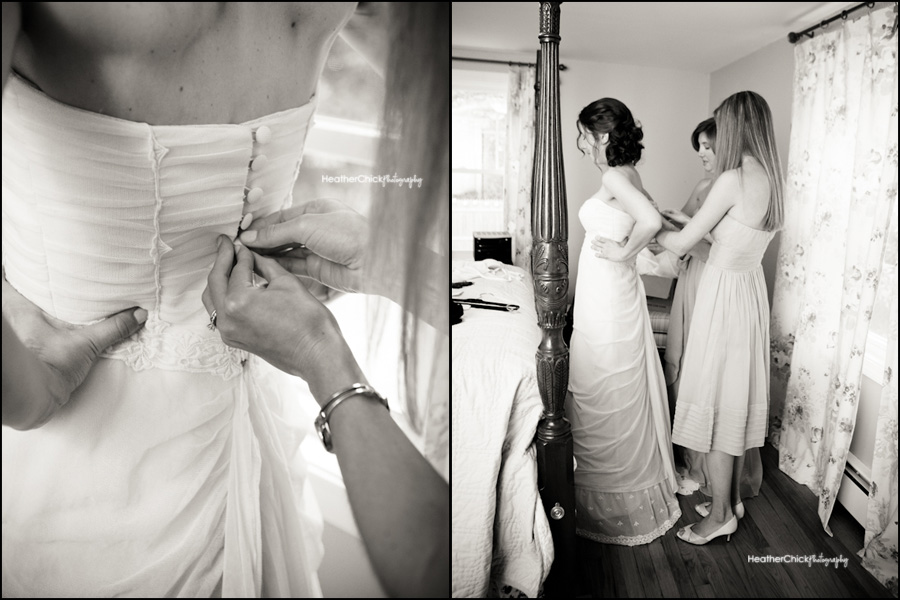 THE shoes…my first time photographing (and touching!) a REAL pair of Christian Louboutins…Stephanie loved them so much that she actually kissed them before strapping them on! 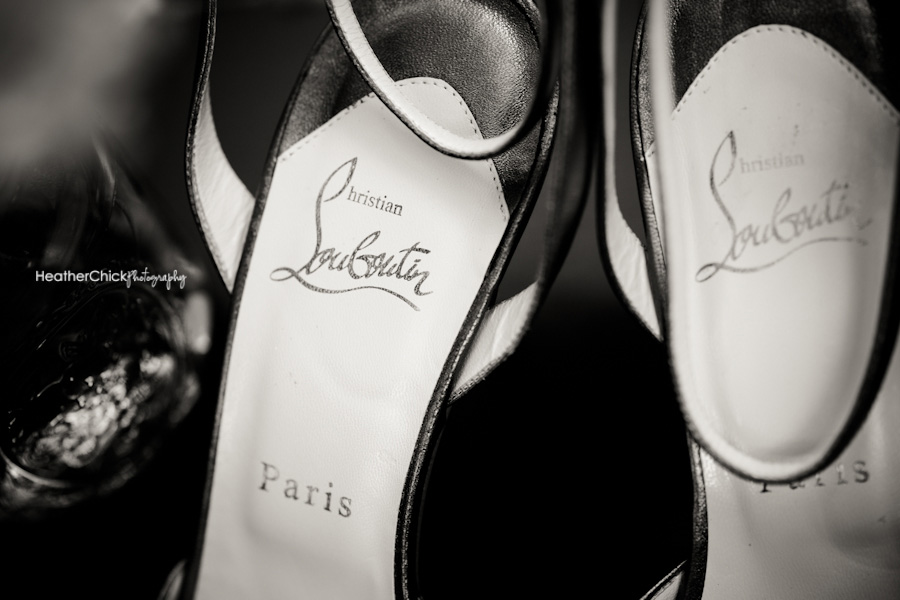 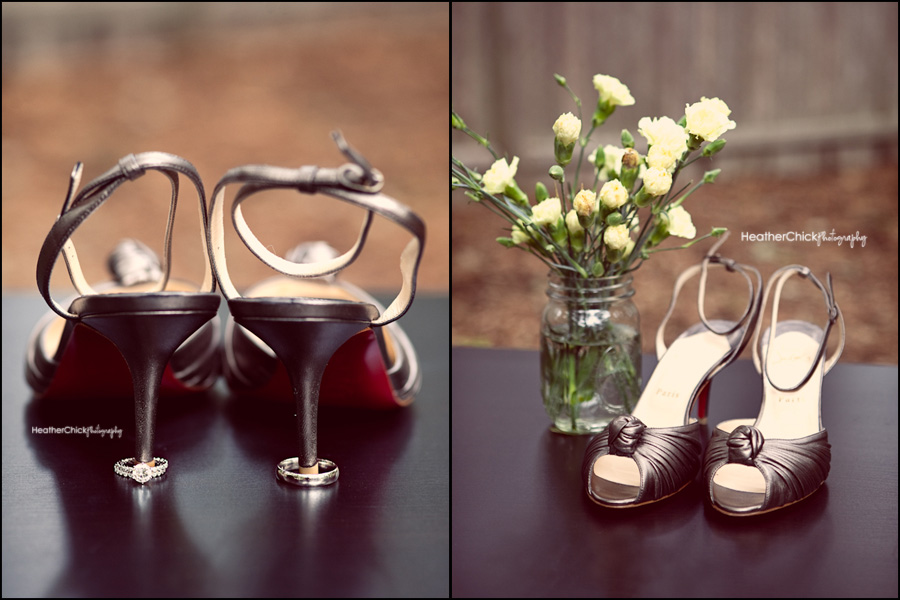 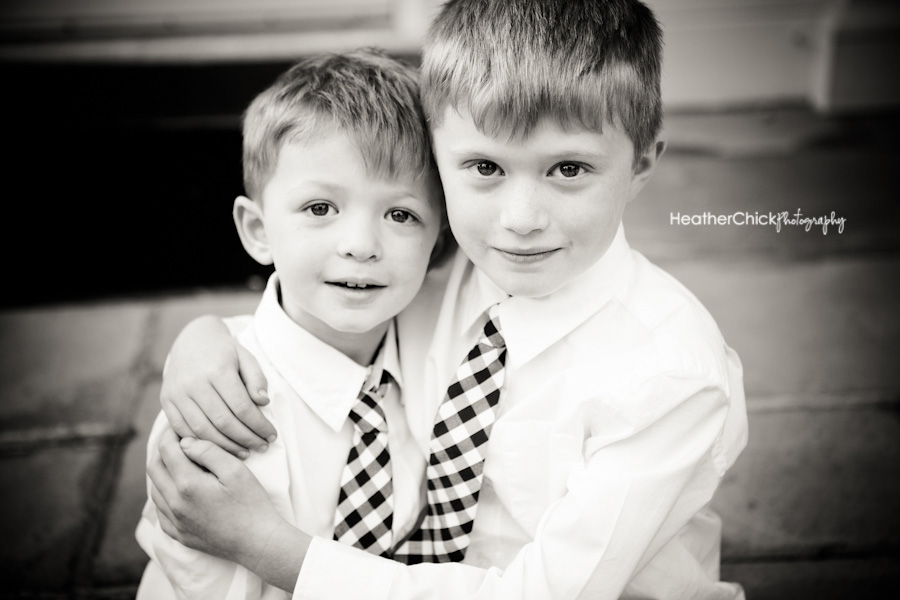 Inside the church in Osterville, where the ceremony took place… 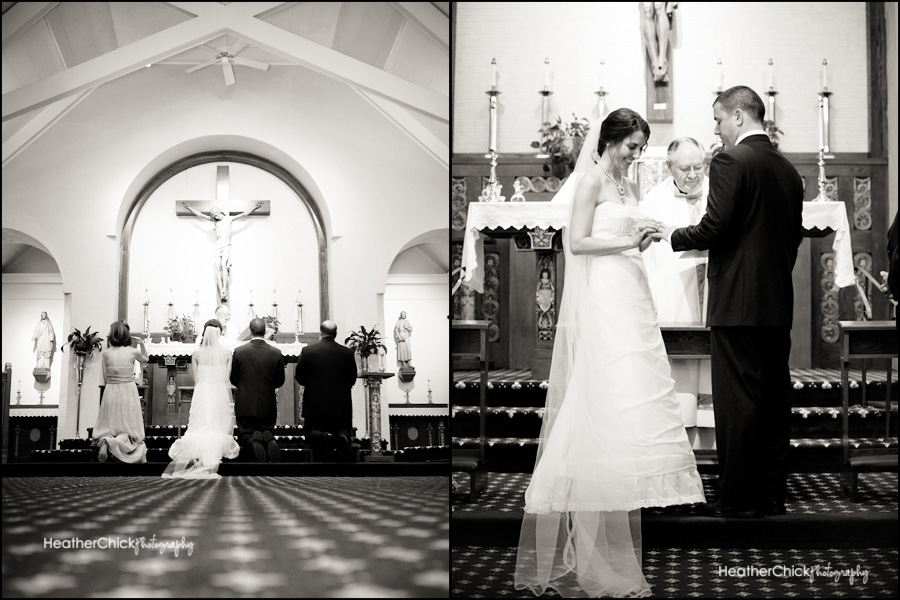 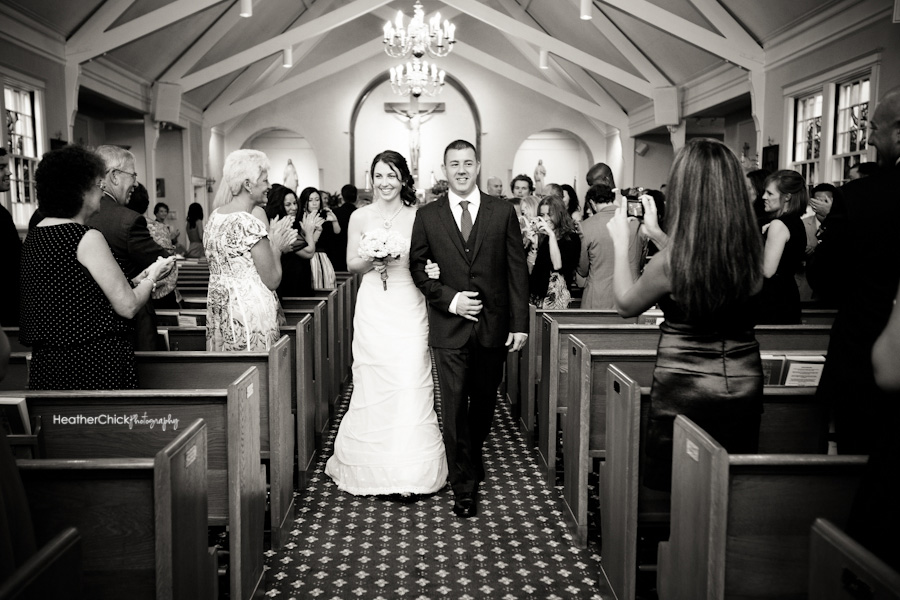 Stephanie and Frankie jumped into a vintage car and scooted away…cans and sign in tow! 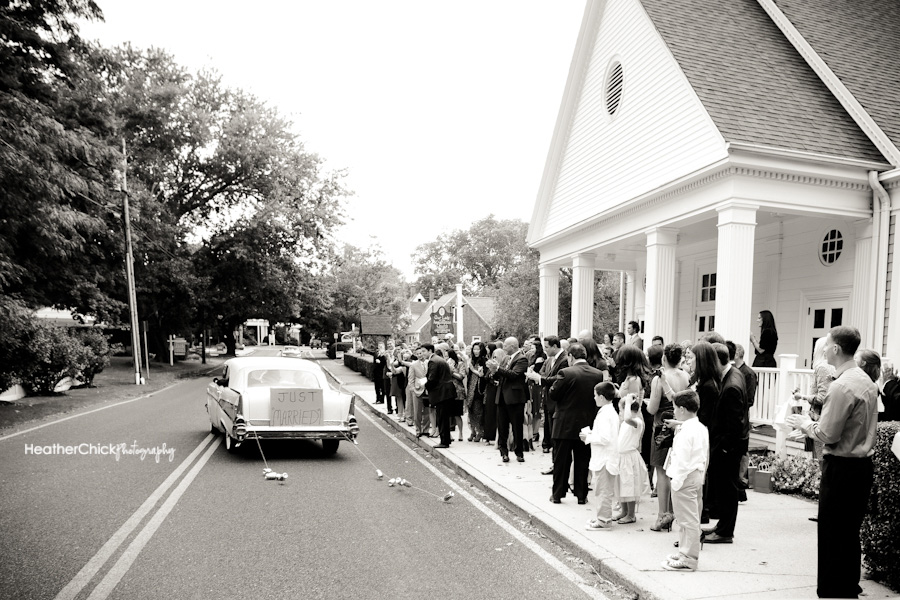 During a quick pit-stop to pull in the cans, I jumped out of the car and grabbed this picture! 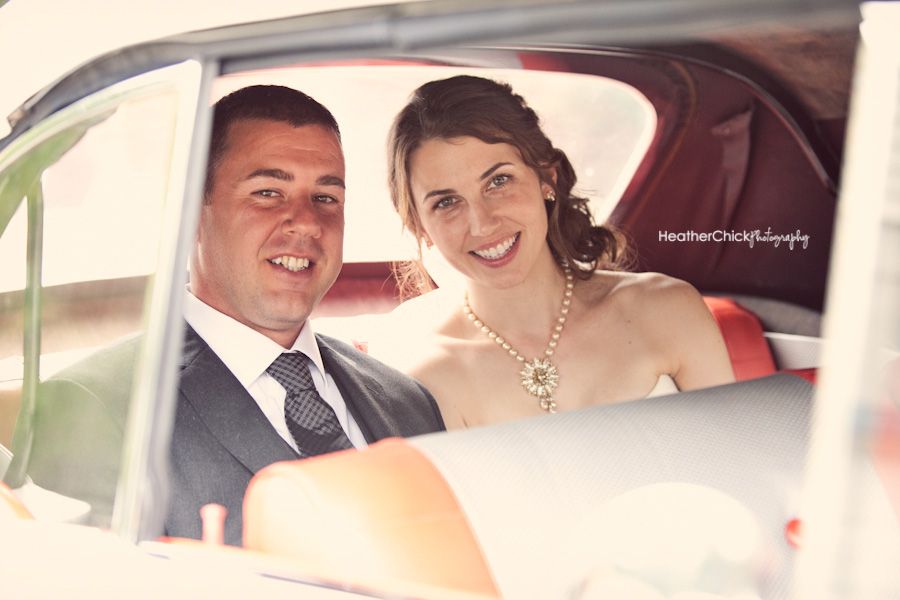 Stephanie and Frankie only wanted a quick few minutes of “formals”…In our 5 minutes (ok…maybe 7 minutes!) I did manage to snap bunch of pictures…They were adorable together!! 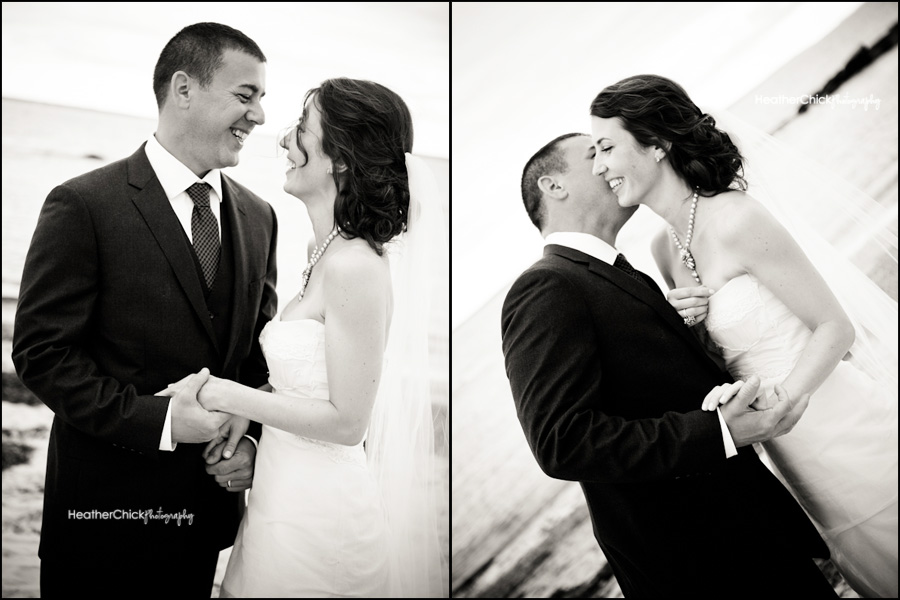 The details from this wedding were fabulous!! I loved everything that Stephanie and her family did!! The “Mr. and Mrs.” signs were made by Stephanie’s mother…I honestly want to have her make me a set…I think they would be cute props for some pictures!! 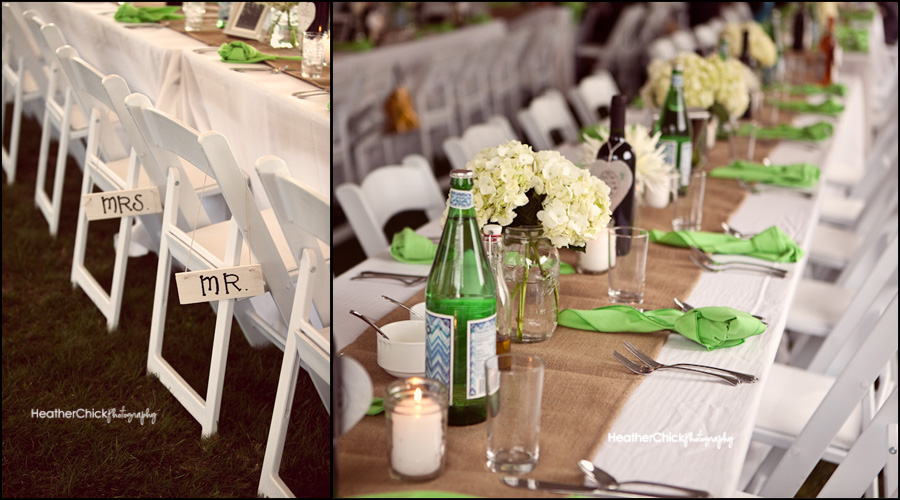 Stephanie and Frankie enjoyed most of their cocktail hour outside the tent….The pick bus was also theirs…it was used to transport everyone to the church and to the after-party! 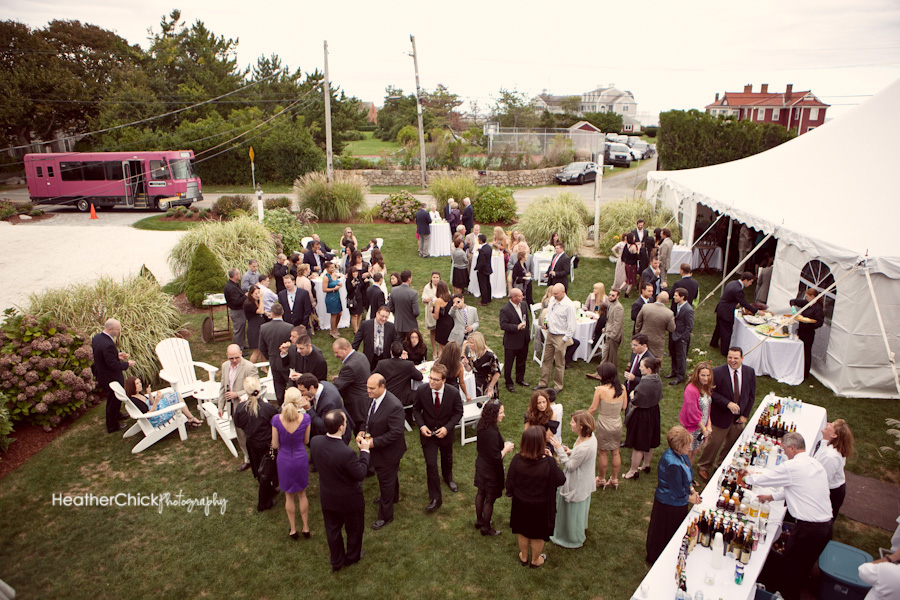 The picture below on the left was shot through my windshield as I was following them to The Beach Breeze Inn, and the picture on the far right was a quick “private” moment during the cocktail hour! 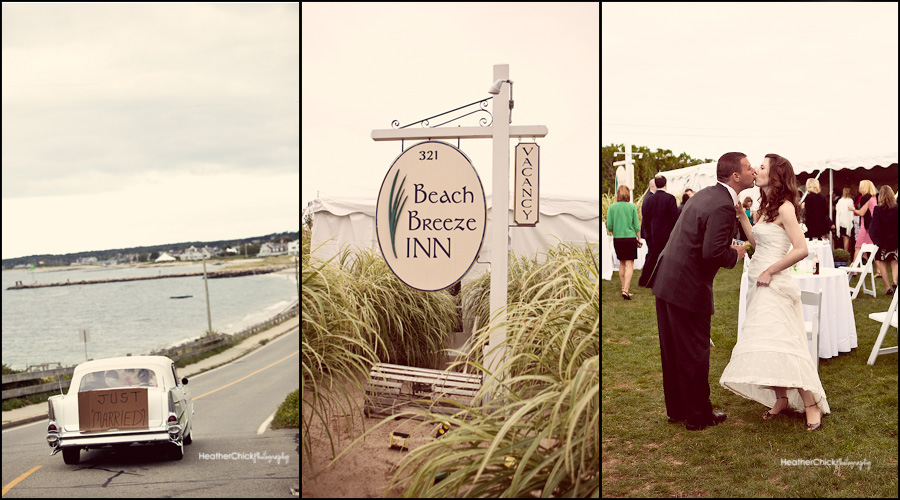 The little guy with his mama, dada and uncle looking on….I love the pure giggle! 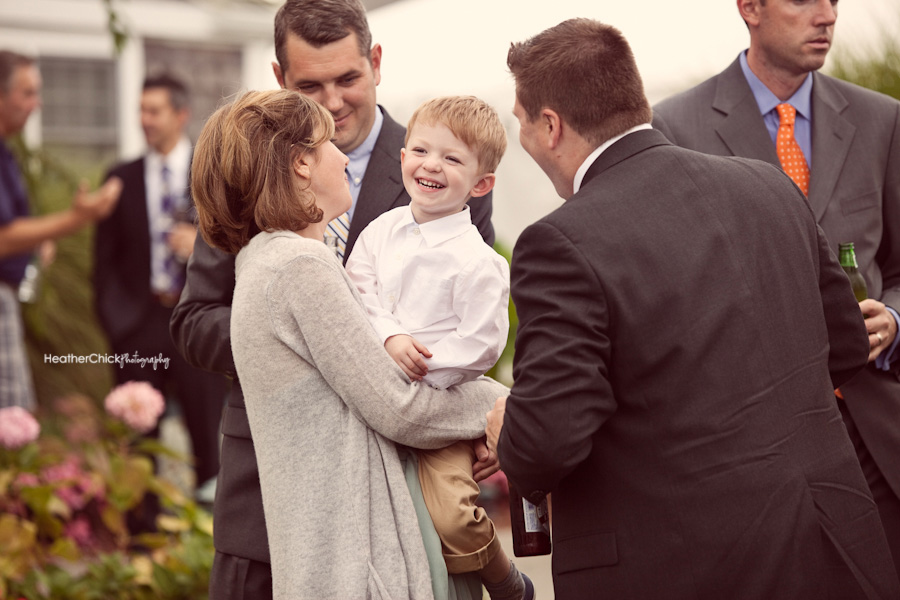 Stephanie and Frankie didn’t do many of the typical wedding traditions, but they did do the parent dances… 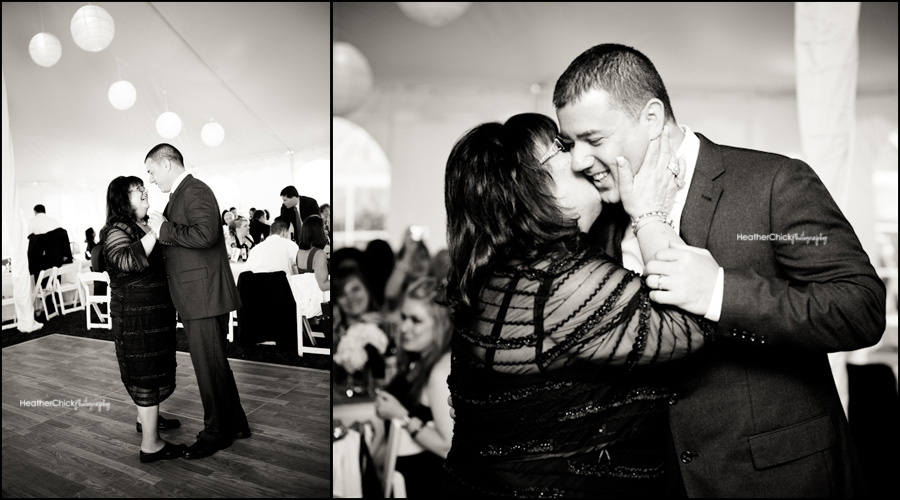 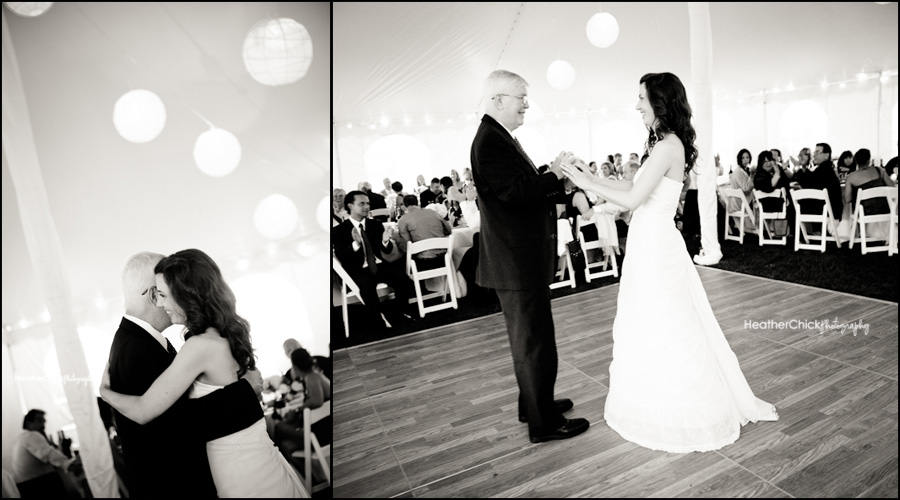 This was technically their first dance…there weren’t any announcements during the evening and the dancing was already in full swing when they actually danced together for the first time…regardless…it was still a special moment! 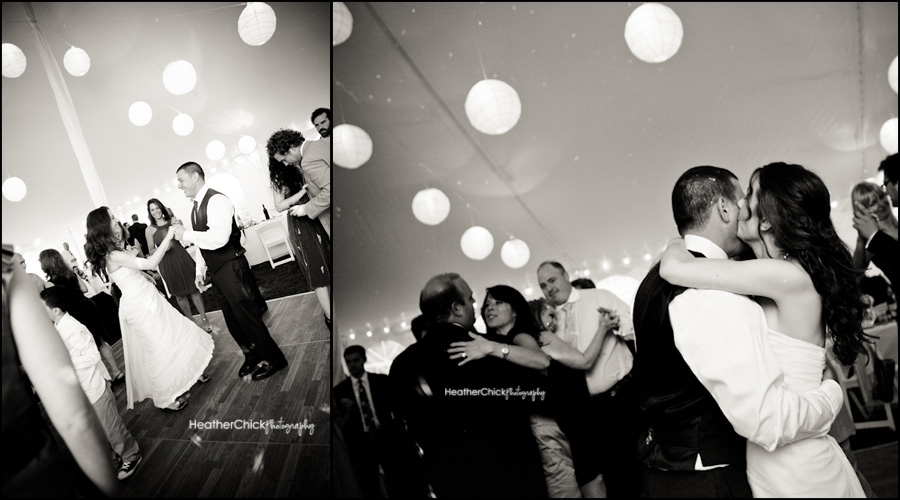 There were tons of sweets and treats to go around… 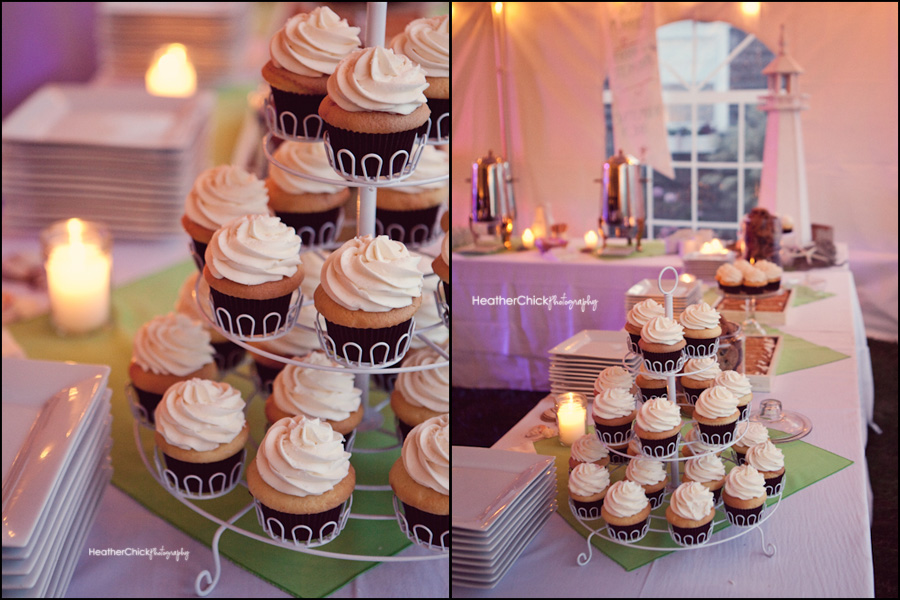 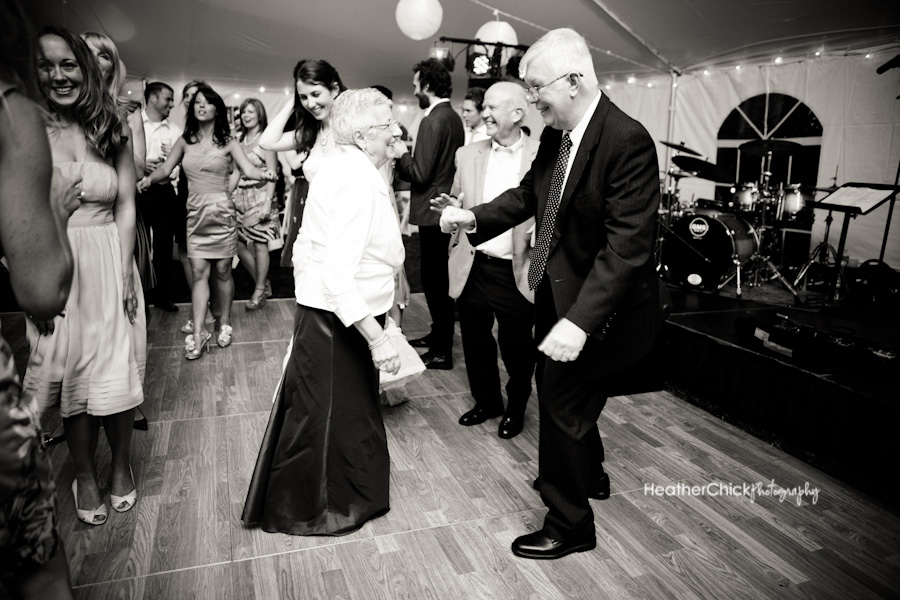 Frankie was showing off the New York Yankees patch that Stephanie had sewed into his tux as a surprise…He didn’t see it until that day and he was definitely proud of it! 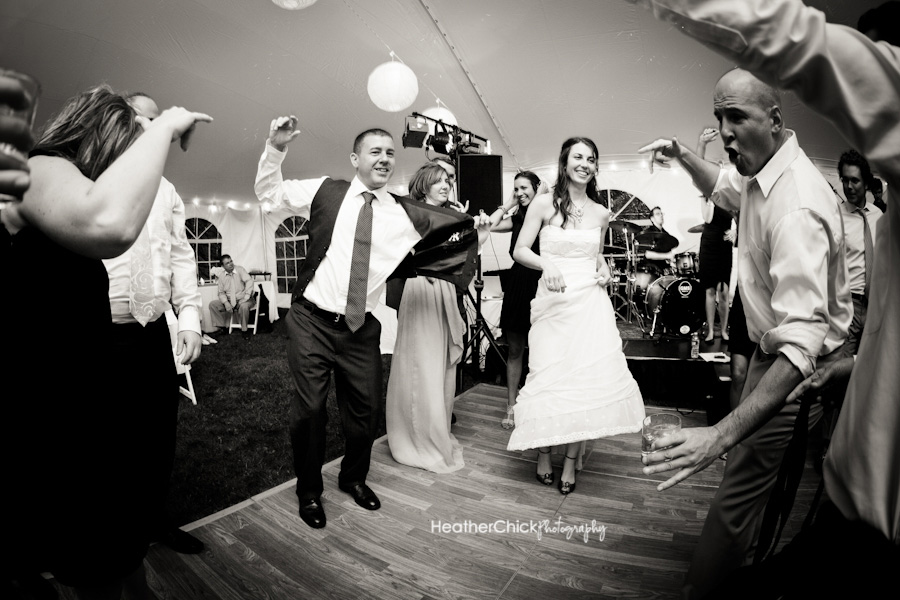 The final song of the night…. 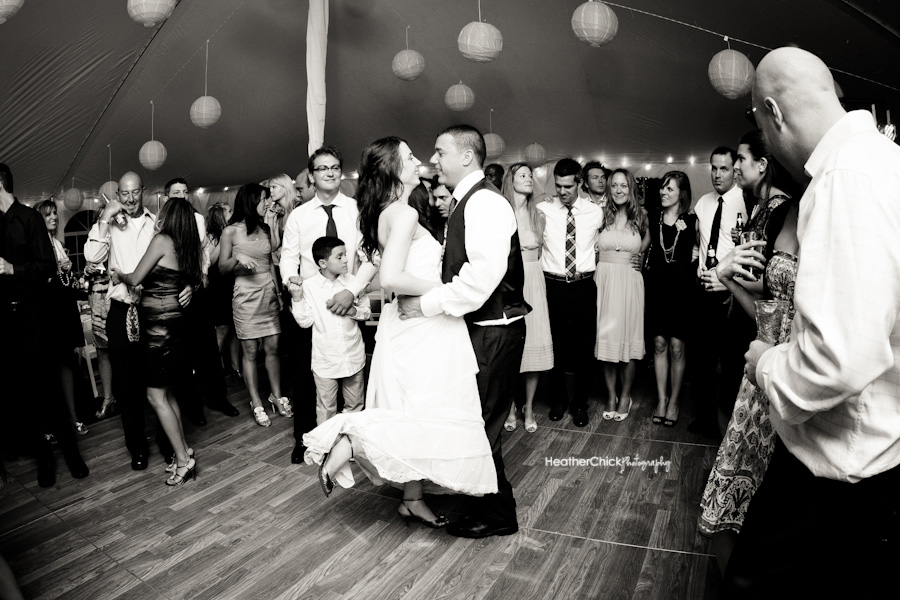 Stephanie (and Christine!)….Thank you so much for choosing me to be your photographer!! Frankie it was a pleasure to finally meet you! Congratulations to the both of you!